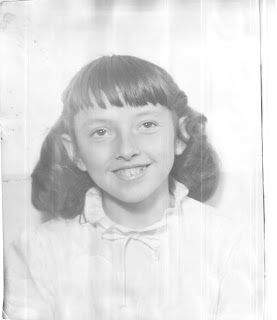 When Mom started going to high school, she was allowed to wear low cut oxford type shoes instead of the high top brown shoes she had worn all through her younger years. The look of the low cut oxfords were only slightly better and it still wasn't what everyone else was wearing at the time. Unfortunately, out of necessity, mom needed to wear shoes that helped her feet rather than shoes that looked good. My Mom tells of times when she had cut the sides of her brown shoes and tucked in the sides to make them look like the other kids. I think we often forget that it doesn't matter what era a person lived in, there were certain fashionable styles and most everyone wanted to look the part. My mom was no different.
When mom was starting her year sophmore year, her friend “Nancy Huse” and she went shopping for clothes for school. Nancy tried on a stylish pair of 'buck' which were all the rage at that time. The were similar to oxfords, but suede and the 'in' thing to have. Mom decided to try on a pair, and decided that she would get them. She convinced herself that she could wear them and they would be comfortable.
At home, Mom showed her parents the shoes and convinced them as well that she would be able to wear them. For two years Mom wore those shoes, even though her feet hurt more and more every day. She knew it was because of not wearing proper shoes, but she didn't want to because she was afraid of what they might say. She did her best keeping her secret until one Saturday right before her senior year. There was a family picnic at Sullivan's Monument with other families from a group that Grandma and Grandpa Rafferty belonged to. A group of them were playing softball and Mom really wanted to play as well. Everything was going ok until it was Mom's turn at the base. She hit the ball and started to run to first base but her feet were hurting so badly that she collapsed to the ground in tears. My Grandparents took one look at her swollen and red feet and got her into the new Guthrie Clinic in Sayre.
Soon after Mom had her last surgery when she was ten, Dr. Alben had retired and the Rafferty's hadn't found another Doctor that was as good and took as good care of Mom as the previous Dr. had. They were very thankful to find this doctor in Sayre. The new Doctor said that Mom absolutely had to have special shoes made for her. This was quite a concern for my Mom because she didn't want to have to wear ugly shoes again. The Dr. assured her that they had people right at Sayre who could make them look fashionable.
It was during one of these visits to Guthrie that the Doctor asked Mom what her plans after high school were. Mom said she wanted to be a nurse but the doctor said she could never do something that required her to be on her feet all the time. He suggested that she try something else in the Medical field like a Medical Secretary. She thought about it and decided she would give it a try.
It probably was presumptuous for Mom to even assume she was going to college, but it just never occurred to her that she wouldn't. Most of her classmates were planning on it, but looking back, Mom realizes that her parents had to have borrowed the $1000.oo that it took to send her that first year.
Mom went for her college interview but the man in admissions wondered why she wanted to go into the medical secretary program because she only had one typing class but had already taken 3 years of sciences and math. He told her she should take Medical technology and after a quick thought, she decided she would.

The week after graduation from High school my mom and 6 or 7 of her girlfriends were invited to a friends cottage on Keuka Lake for a week. They spent the week water skiing, swimming and enjoying being recent graduates. When Mom had been in school, she had never been boy crazy partly because she was very unsure of herself and didn't want to go out much. Mom doesn't think the guys disliked her, but no one ever asked her out and she is sure it had everything to do with her feet and how she looked. At one point while at the cottage, one of Mom's friends said that there was this guy across the lake whose parents had a cottage there. She said he was a good looker, but wasn't there often, but they took a ride over by the cottage, but nobody was there.
I will tell you the significance of this later.

Posted by jeanette norman at 8:01 PM