Being early is over-rated and other lies......


My husband and I are completely opposite on most things most of the time..... He is a math genius, and anything other than the basic one plus one and simple division (with aid of a calculator) are utterly lost on me.  I, on the other hand, love to write which boggles my husbands brain.  Yet, one thing we can agree on, is being on time OR early to events, church, parties, etc....   I had always been taught, as well as my husband, that being late to something tells people that your time is not as important as mine.  SO, how did we end up with a daughter that is perpetually late, always looking around for things the last minute and is the ultimate in oblivious to the clock.
This morning was no exception.  As usual, we woke up at 6:30 to begin our before school regime.  I have decided that all the kids take showers, baths or whatnot the night before because it just added to our delay in the morning.  Ok, back to the story, anyway, we get up.  I wake Ally up first and tell her to get up and get breakfast.   Ten minutes later she finally gets up.  Walks around in a daze for another ten minutes and then begins the process of finding her clothes ( which she already got out the night before).  This brings us to 7am at least.  The bus comes at 7:40.  Again, I remind her to get her breakfast.  Five minutes later she is in the bathroom washing her hair AGAIN.  Again, I remind her we are leaving in 20 minutes for the bus.  Is she dressed?  No.  Is her hair done?  No, washed yes, combed no.  I tell her that she needs to put her lunch in her bookbag.   "ok" she says.  Five minutes later I look, and the lunch is still sitting on the counter.  UGH.  So by this time we are at what, like ten minutes before we need to leave.  Again, with agitation in my voice, I say to miss Ally, "Ally, we are leaving in ten minutes, you NEED to get dressed, put your lunch in your bag and get your shoes on."
All the while, my blood pressure is rising, my eyes are starting to twitch and Ally looks at me like I'm completely over-reacting.
Time to leave. I am walking out the door.... actually, I lie.  I've learned that if I walk out the door before the kids, that is usually a clear sign we will miss the bus, so I have learned to be the last one herding the chicks out the door.  But I digress.....  I tell them I'm walking out the door.  The boys grab their things and head out the door.  I call, no scream, for Ally.  She come out of the bedroom, buttoning her pants, shirt half on, hair still wet, no shoes on, lunch on the counter, book-bag no where to be found, and the look of sheer disbelief that I, yes, I could have made her late! 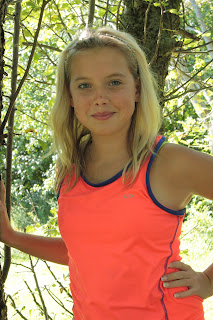 Somehow, we manage to grab everything she needs, get in the car, head to the bus and STILL have a couple minutes to spare.......  to which Ally says "but I didn't have time to get breakfast".
Posted by jeanette norman at 1:55 PM No comments:

I miss having the kids home.....  Well most of the time I do.  I love the relaxing, do-what-we-wish feel of summer, but sometimes it is nice having the routine of September when the kids go back to school.
When summer is here and kids are home, it is time for me to put down the writing and blogging and focus on my most important job, which is being a mom.   By September, I am usually chomping at the bit to get out my computer to log or write or whatever......  And this year it's even more busy because of my book being published and all that goes into marketing, signings, speaking engagements, etc.
This year I only had 3 kiddos heading off the school this year.  it was odd not to have my oldest daughter here to help offer suggestions about what to wear to siblings.   she is off on an adventure of her own, attending Word of Life Bible college in the Adirondaks.   It's so exciting for her, but this mom is missing her terribly!
So, here we are getting into the swing of things, with homework, soccer games, and the normal "stuff" that most household have.  I'm looking forward to all this school year holds!
Posted by jeanette norman at 11:15 AM No comments: